For sensory experience, last night in Qingdao was pretty golden. A swift jaunt was made to the local Carre 4 — a French company bringing China their version of Walmart. I bought some nice looking green and oolong teas sold in bulk and pitched in to get a cake for Lancelot (it was his birthday). Lancelot is not his real name, but many of the chinese students have created english names (loosely based on their true names) in order to help the westerners stop butchering their language. Similarly, I had someone translate my name into chinese characters so it could be pronounced more easily.

Into the streets we went. The groups fractured and I found myself wandering Qingdao city with Lancelot from Beijing and Allan from Boston. First mission was to find out why there were tapped kegs of beer on so many sidewalks. Two yuan were handed over to someone sitting by a keg and a weighed kilogram of beer in a plastic shopping bag was handed over; along with a wrapped juice straw. A gross distortion of drinking capri-sun back in the day. 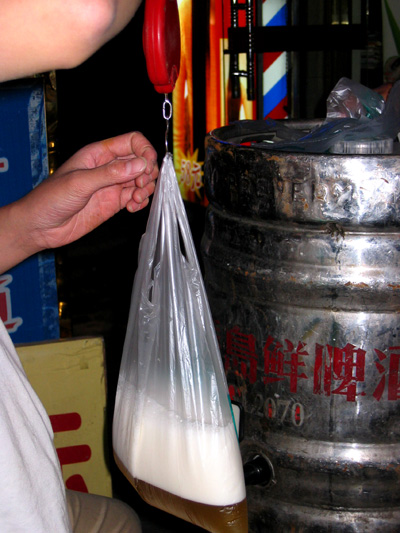 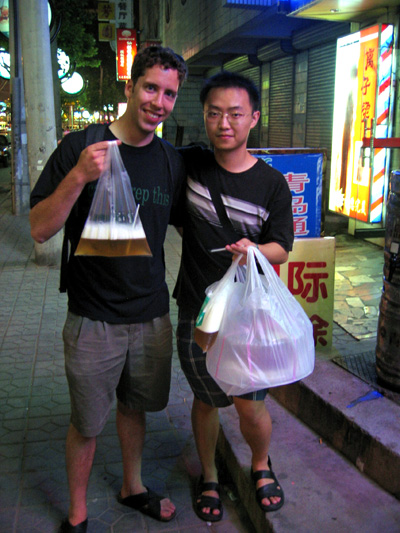 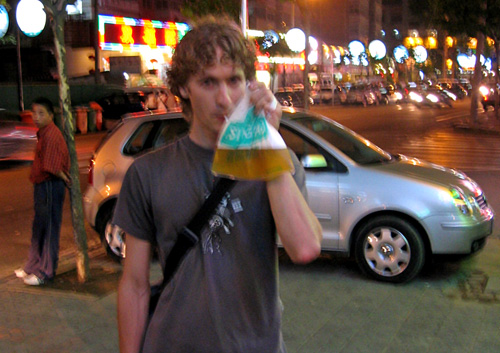 Drinking and talking, cultures colliding, we found ourselves next to an array of kebab stands selling various creatures cooked on sticks. Allan eyed the box of wiggling, larvae-like things. Some translations were made by Lancelot and we found they were silk worms. They were very strange to watch. One end of their body was spiraling round and round. Allan decided a new food discovery could not be passed up. 5 for 2 yuan. Onto a wooden stick they silk worms went. A yellow fluid oozed from them. I cringed. A sauce of hot spices was applied with a brush, and onto the grill they went. I ordered squid on a stick, a Qingdao specialty. 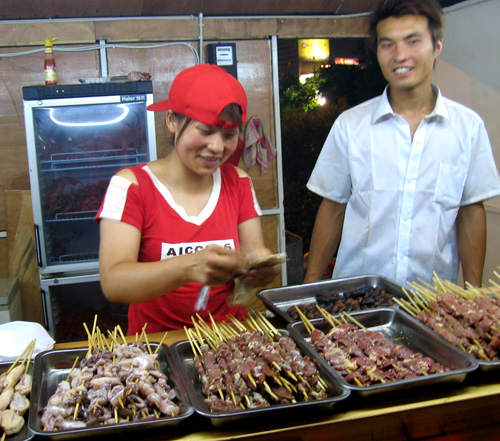 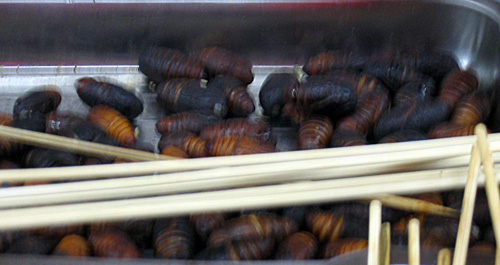 Allan made little hesitation to try his new found food. He popped a cooked silkworm into his mouth and chewed heartily. “This is fairly disgusting”. He spat the remains into the bushes nearby. I offered some of my squid, which was great. After his bite of squid he said, “you should try the silkworm.” Though his experience offered humor, it did little to entice. “Oh come on,” he persisted, “you can have silkworm with a squid chaser.” I sighed. 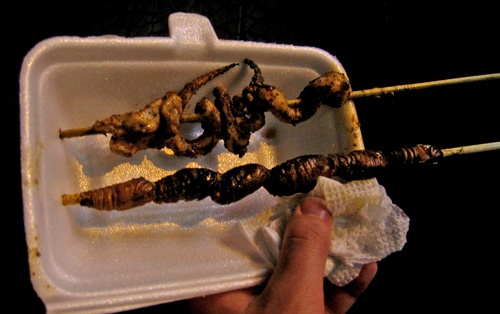 Much hesitation ensued, but I found myself waving a stick of silkworms in front of me until finally, i was chomping down on one. Cooked, leathery flesh compressed between my teeth. The flavor of spice mingled with the fresh silkworm insides squeezed out like toothpaste from a tube. I chewed. It wasn’t as bad as I was expecting. It wasn’t so good, but it wasn’t terrible. It reminded me of scallop you’ve been chewing on too long. 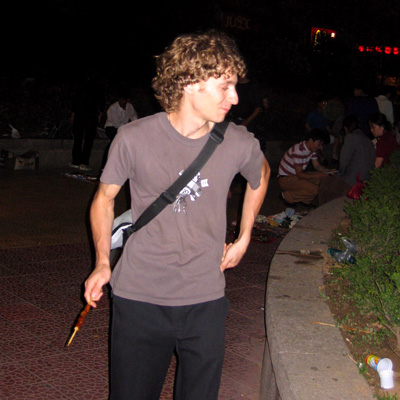